Did you know that the Agricultural Health Study (AHS) is the largest study of agricultural exposures and health in the U.S. and one of the largest in the world?

You, along with more than 89,000 participants, have provided us with valuable information on your farming practices, pesticide use, and health status. We thank you for making this study possible.

In the past 20 years, we have identified agricultural activities that are associated with chronic diseases, including cancer, respiratory disease, and Parkinson's disease in both men and women. We have also identified factors associated with safer pesticide use. We share findings from the AHS with as broad an audience as possible, including you, agricultural extension services, and pesticide educators.

Your participation is key to the success of the AHS! This year we are asking most of you to complete a follow-up health survey. We will use this information to further assess the links between agricultural factors and health. In the past, we've shown that growing up on a farm reduces the risk of some diseases. We will continue to look at factors related to farming that benefit health as well as those that may be harmful.

We've all been told that it is important to wear chemical-resistant gloves when using pesticides. Yet, how well do gloves work under real field conditions?

Gloves were very effective at reducing pesticide exposure. But do not forget other key safety steps. Because gloves may not be 100% effective, washing your hands right away after using pesticides is still important. Be sure to read the product label for the type of glove needed for your application. Also, check the label for any other protective clothing and equipment that may be required.

The hands often have the most direct contact with pesticides. Protecting your hands reduces pesticide exposure.

Cancer among Livestock and Poultry Farmers 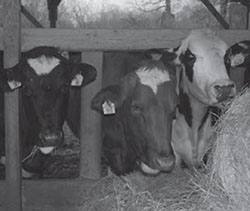 Researchers are studying how activities related to raising livestock and poultry may increase or decrease the risk to farmers of developing cancer. In a recent study, AHS researcher Dr. Laura E. Beane Freeman found that, compared to other farmers who did not raise poultry, people who raised poultry had a lower risk of developing lung cancer. This difference was not fully explained by the lower rates of smoking among AHS farmers who raised animals, compared to other AHS farmers, the researchers reported. The participants included almost 50,000 men, of whom about 30,000 reported raising animals on their farms.

However, the study also found that farmers who work with animals on their farms were at higher risk for other cancers:

We don't yet know the specific factors responsible for these associations. Farmers who raise livestock and poultry are exposed to many agents that might influence their cancer risk. For example, certain viruses and pesticides have been shown to increase the risk of certain cancers. On the other hand, endotoxins, which are chemicals found in some bacteria, are present in animal facilities and stored grain and are thought to offer some protection against lung cancer.

More information on using gloves effectively can be found at https://store.extension.iastate.edu/Product/pm1663c-pdf, or you can contact your local extension office.

All-terrain vehicles (ATVs) are commonly used on farms but can be very dangerous. They result in hundreds of injuries and deaths every year, including among children.

Anyone who works with pesticides is at risk of being exposed to a larger than normal amount of these chemicals. This type of occurrence, called a "high pesticide exposure event" (HPEE), does not always result in pesticide poisoning. In the AHS, 23% of applicators have reported at least one HPEE in their lifetime.

A study led by Dr. Sarah E. Starks and Dr. Fred Gerr from the University of Iowa showed that HPEEs may be associated with subtle changes in memory and attention. The researchers gave a group of AHS participants (all licensed pesticide applicators) nine tests of memory, motor speed, attention, verbal learning, visual scanning, and processing speeds while doing simple mental tasks such as remembering and repeating back a list of words. For seven of the nine tests, there were no differences between those with and without prior HPEEs.

However, participants with a history of an HPEE were more likely to take longer to complete two of the tests: one of sustained attention and one of remembering a series of letters. Memory and attention tend to decrease as we get older. Participants with HPEEs had scores that were similar, on average, to those of applicators who were 4 years older.

AHS researcher Dr. Kevin Payne found that almost 4% of AHS participants (commercial applicators, private applicators, and spouses) reported having an HPEE between 1993 and 2003. Key factors related to having a recent HPEE are listed below.

Some of these factors may directly contribute to having an HPEE while others may be characteristics of people more likely to have HPEEs.

Our research indicates that HPEEs are associated with changes in health, including subtle changes in memory and attention as well as increased respiratory disease. Fortunately, some of the pesticide handling practices we identified as related to HPPEs are behaviors you can change. These practices can be targeted in pesticide safety training and education.

Farmers 18- to 38-years-old had a 4.5-fold greater risk of being exposed to a larger than normal amount of pesticides (called a "high pesticide exposure event" or HPEE), compared to farmers over the age of 55.

Between 1 and 9% of U.S. adults have thyroid disease or abnormal thyroid hormone levels that may eventually require treatment. Other than exposure to radiation, having low levels of iodine, and taking certain medications, we know very little about the causes of thyroid disease. The most common type of thyroid condition is an underactive thyroid, known as hypothyroidism. It can cause weight gain, excessive tiredness, and sensitivity to cold. More women than men have underactive thyroids.

In a study led by Dr. Whitney Goldner of the University of Nebraska Medical Center, AHS researchers examined the possible link between thyroid disease and pesticide use among 16,529 female spouses of licensed pesticide applicators. The team found that women who used the organochlorine insecticides lindane or chlordane were 20 to 30% more likely to have an underactive thyroid. Using the herbicide paraquat was associated with an 80% increase in risk, and women who used the fungicides benomyl or maneb/ mancozeb were more than twice as likely to have an underactive thyroid.

These results are consistent with findings from laboratory studies suggesting pesticides could play a role in thyroid disease. "The findings from the AHS support a role of agricultural chemicals in thyroid disease and may help researchers identify ways to prevent this disease in the future," said Dr. Dale Sandler of the National Institute of Environmental Health Sciences.

We periodically contact everyone in the AHS to update heath information. Well, it's that time again and it's important that we hear from you. To get the best information on the relationship between farming and health, we need every one of the AHS participants to respond. Our short survey is available now. It takes about 25 minutes to complete. You can take the survey online, by phone, or on paper. If you can't do the survey on your own, you may ask someone to help you or to complete it for you.

For the AHS to be as successful as possible, we need to hear from you, whether

As always, your information is kept confidential. Some examples of how the information you provide is used are highlighted in the articles in this newsletter.

For most of you, directions for completing the survey are enclosed with this newsletter. Please fill out your survey right away. That way we won't need to bother you with reminders. If you want more information, please call us at 1-855-443-2692.

Thank you for making the AHS so successful! The information you share helps us learn how farming influences the health of people like you.