We want to thank you again for your ongoing participation in this important study. You may wonder whether you or your spouse should still participate in the study if you no longer work on a farm or apply pesticides. Our response is an emphatic "YES—we need you now more than ever!" 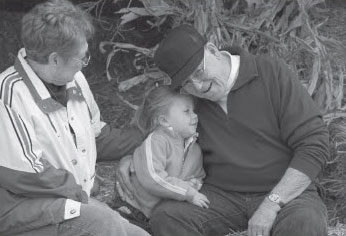 Many important health conditions that may be related to exposures on the farm can develop later in life—including during the years after you have stopped farming. Indeed, some Agricultural Health Study (AHS) participants end their career because of changes in their health. We might miss important clues about farming and health if we were to study only people who are still farming.

The AHS is the largest study of agricultural exposures and health in the United States. The information you and other participants provide makes it possible for us to learn a lot about how farm exposures may affect health. This knowledge may suggest new approaches to safety that could help you, your neighbors, and your family members. By remaining involved in the AHS you are playing a vital role in the health of future generations of farmers and agricultural workers.

Whether you are farming or have retired, we wish you well and thank you for your continued participation in the AHS. For more information on the study, please visit our newly updated website (www.aghealth.nih.gov) or call us at 1-800-4-AGSTUDY (1-800-424-7883). For more information about several ongoing AHS sub-studies that you may be contacted to participate in, please see below.

This finding was based on information from AHS participants who answered questions about their lifetime use of 50 different pesticides when they enrolled in the study between 1993 and 1997 and then again 5 years later. Dr. Stella Koutros of the National Cancer Institute in Rockville, Maryland, and her colleagues found that frequent users of the insecticides malathion and terbufos were more likely to develop aggressive prostate cancer, compared with participants who didn’t use either insecticide. Fonofos and aldrin, insecticides that are no longer registered for use in the U.S., were also associated with an increased risk of aggressive prostate cancer.

This new work is important because it included a large number of men with prostate cancer and it was possible to focus specifically on aggressive prostate cancer, a more clinically significant form of the disease.

Overall Use of Pesticides not Linked to Depressions among Farmer's Wives; Pesticide Poisoning May Increase Risk

In the United States, about 20% of women have been diagnosed with depression, compared to about 11% of men. Some studies, including the AHS, have shown a link between pesticide use and depression in men. But information on the risk for women was limited. John Beard, of the University of North Carolina at Chapel Hill, and his colleagues have now completed the first follow-up study of women’s pesticide exposure and risk of depression.

The investigators looked at data from almost 17,000 wives of farmers and pesticide applicators in the AHS. None of the women had depression when the study began. The women reported information on their exposure to 50 different pesticides. More than 1,000 women were diagnosed with depression during 12 years of follow-up.

The researchers found that women who used pesticides, or whose husbands used pesticides, did not have a greater risk of developing depression than the other women. However, the few women in the study who had been diagnosed by a physician with pesticide poisoning were nearly twice as likely to develop depression compared to women who had never been diagnosed with pesticide poisoning. The researchers controlled for other factors that have been linked to depression, such as having a chronic disease.

We do not yet fully understand how pesticides may affect the risk for depression. However, we do know how to decrease the likelihood of pesticide poisoning. When working with pesticides, be sure to follow the manufacturer’s label instructions and use good work hygiene and personal protective equipment when needed.