Mesage from the Executive Committee

The Agricultural Health Study (AHS) conducted its first interview in December 1993 and within four years we enrolled nearly 90,000 participants! Over the past 19 years, many of you have completed additional interviews, provided biological samples, and allowed study investigators into your homes for special studies. We truly appreciate your effort and time.

Your continued participation and support is the foundation of the study's success. In the time since our last update, the study has learned more about the health of farm families and the risks of farming. This information will help improve the well- being of farm families across the country.

Yet, we still have more to learn.

We are writing to thank you for your participation, to let you know we are still going strong, and to update you on our findings and activities. We include news on prostate cancer, pesticides and Parkinson's disease, as well as overviews of several ongoing smaller studies. If you get a call to participate in one of these studies, we hope you say, "yes." Please know that we will always protect your privacy and the confidentiality of the information you give us.

Best wishes to you and your family,
Agricultural Health Study Executive Committee

Q&A: What Are You Doing with My Cheek Cells?

Q: I returned a vial of mouth rinse. Can you tell me how it was used?

A: Approximately 35,000 AHS participants provided a vial of mouth rinse containing cheek cells. The biological samples contain DNA that can be used to measure small variations in genes. We are using these samples to tell us how variations in genes affect disease risk.

We know that factors like smoking, exercise, diet, or exposure to certain chemicals can influence risk of disease. However, the development of chronic diseases, such as cancer, is usually due to multiple factors, including variations in genes. For example, not all smokers develop lung cancer.

In one such study, we use DNA from cheek cells to study the risk of prostate cancer in men who use certain chemicals. We found that men with a certain genetic trait who used some pesticides, including fonofos (an organophosphate insecticide no longer sold in the United States), had a greater chance of getting prostate cancer than men who used the same pesticide, but did not have the genetic trait. These findings need to be confirmed in other study populations. It is too soon to make any health care recommendations based on these results. We still have much to learn about the complex relationship among genes, our environment, and our health.

The AHS is among the first studies to identify a link between variations in genes, pesticide exposures, and prostate cancer risk.

The AHS invites some participants to be part of smaller research studies to learn about specific diseases or exposures. Currently, we are working on three such studies (see below). We also continue to contact participants who report specific health conditions, such as rheumatoid arthritis and certain cancers, to obtain additional information on their diagnoses and to collect cheek cell samples for future studies.

Biomarkers of Exposure and Effects in Agriculture (BEEA) Study

AHS investigators have launched the BEEA Study led by Drs. Michael Alavanja and Laura Beane Freeman from the National Cancer Institute. Over the next three years, we will collect blood and urine samples and questionnaire information from 1,600 men. We are also collecting house dust samples from some participants. The samples and data will be used for a variety of future studies.

"In past studies we have been able to identify links between certain pesticide exposures and disease risk by combining information from questionnaires with DNA from cheek cell samples. Blood and urine samples from the new study will allow us to expand our understanding of how pesticides influence disease risk," says Dr. Alavanja.

MRSA (pronounced MER-sa) is a type of bacteria responsible for several difficult- to-treat infections in humans. Most MRSA infections occur in people who have been in hospitals, but MRSA infections are also found in people who work with some kinds of livestock. The MRSA Study, led by Dr. Tara Smith at the University of Iowa, is investigating factors that might increase a person's chance of developing such an infection. Currently, 1,100 AHS participants in Iowa have provided nose and throat swabs, as well as information about their exposure to livestock and healthcare settings. The participants will also complete surveys about possible infections that might develop within 18 months after enrolling in the study. Participants who develop a possible infection will be asked to send in a swab sample. The study will help answer questions about MRSA among people who work with livestock.

The Lung Health Study, led by Drs. Jane Hoppin and Stephanie London from the National Institute of Environmental Health Sciences, will help us better understand how farming may affect lung health. Agriculture is full of potential respiratory hazards caused by animals, hay, grains, pesticides, and diesel exhaust. So far, about 1,800 people have enrolled in the study. The goal is to include 3,000 people. Study participants agree to a home visit during which trained study staff measure lung function, draw blood, and collect dust samples. This information will be used to see how a person's genetic information and history of exposure to chemicals and other hazards may influence lung health for both farmers and spouses.

AHS Participants are Healthier Overall than the General Population

On the other hand, while overall injury deaths were lower, deaths related to machinery continue to be higher among AHS farmers compared to non-farmers.

A few cancers are more common among AHS farmers, including prostate cancer. We are carrying out additional studies to learn more about the risk of developing these cancers

Fast Fact:
Did you know even your eyes can become sunburned?
Learn more in the Sun Exposure Fact Sheet enclosed with this newsletter.

AHS Examines Potential Link Between Pesticide Use and Rare Cancer

Little is known about the causes of multiple myeloma, but some studies have found an early marker related to a higher risk of the disease. A small number of people with monoclonal gammopathy of undetermined significance (MGUS) go on to develop multiple myeloma. MGUS is a benign condition in which abnormal blood cells make M proteins. Usually, MGUS has no symptoms. It is found with a blood test.

A recent small study in the AHS found farmers over the age of 50 were more likely to have MGUS than men of the same age in the general population. A link between MGUS and some pesticides was also found, but the study was too small to draw firm conclusions. "If we identify specific exposures related with excess MGUS, it may help us understand the causes of multiple myeloma, and design studies to delay and prevent its progression," said Dr. Ola Landgren from the National Cancer Institute. 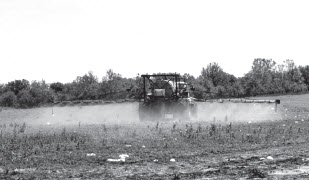 Parkinson's disease is a common neurological disorder affecting movement; about one million people in the U.S. have been diagnosed with the disease. In a study led by Dr. Freya Kamel from the National Institute of Environmental Health Sciences and Dr. Caroline Tanner from the Parkinson's Institute, AHS researchers found a link between the use of two pesticides and risk for Parkinson's disease. Although the number of AHS participants with Parkinson's disease is small, participants who used either rotenone or paraquat developed the disease about 2.5 times more often than those who never used either pesticide.

These results extend earlier evidence from laboratory studies. In animal studies, both pesticides can cause movement problems similar to those in humans with Parkinson's disease.

In studies of cells, these pesticides can cause damage similar to that found in brain cells of humans with Parkinson's disease.