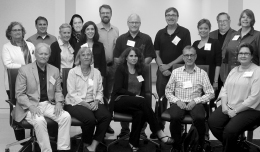 Last year, the AHS celebrated its 25th year, and with your help and participation we’re still going strong! We have made important discoveries about how agricultural exposures affect health, but have much more to learn. Here we describe some of our recent findings, as well as ongoing and future activities. If you or your family members are asked to participate in these projects, we hope that you will consider doing so.

In July 2018, we met with our National Advisory Group, an independent group of scientists, agricultural specialists, and farmers who advise us.

Nearly all women in the AHS enrolled because they were married to a farmer. At enrollment, more than a third of spouses reported using insecticides and nearly 8% reported using at least one organochlorine (OC) in their lifetime. OCs, introduced in the U.S. in the 1940s, were widely used in agriculture through the 1960s. The use of one or more OC by women in the AHS was associated with increased rates of glioma (malignant brain tumor), multiple myeloma, pancreatic cancer, and certain types of breast cancer, compared with those who did not use any OC. In later years, OCs were largely replaced with organophosphate insecticides (OP). Women who used the OPs chlorpyrifos and terbufos were observed to have higher rates of breast cancer.

Spouses who don’t use pesticides can still be exposed from spray drift or handling pesticide-contaminated items on the farm. In one study, we saw a higher rate of breast cancer in spouses whose husbands used the OP fonofos. To improve our ability to study the health effects of pesticides in spouses, we have developed new methods to reflect specific indirect exposures, e.g., distance between the house and fields where pesticides are sprayed. We plan to share new results on the implications of indirect exposures in the years to come.

Updating Your Health Information after 25 Years of Participation

It’s time for the next health update and we need to hear from you! In addition to brief questions about health and farming, the survey asks about farm-related stressors, an important topic for the well-being of farmers and their families. The survey takes just 15-20 minutes to complete which can be done online at http://www.aghealthsurvey.org (using a personal identiﬁcation number or PIN, sent separately) or by mail or phone (1-855-293-5802).

Overall rates of cancer in the AHS remain lower than in the general population, especially cancers of the oral cavity, pancreas and lung. Lower rates of smoking may partly explain decreased smoking-related cancers such as lung cancer. Beyond smoking, AHS farmers who reported raising animals and handling stored grain were observed to have lower rates of lung cancer, which may be due to endotoxin exposure [see below]. In contrast, higher rates were seen for prostate, lip, thyroid, testicular, and peritoneal cancers, and multiple myeloma and acute myeloid leukemia. We continue to investigate the reasons for these excesses.

Endotoxins, from the cell walls of decayed gram-negative bacteria, are often found in agricultural settings. Endotoxins can have non-speciﬁc immune effects that play a role in the development of inﬂammatory diseases and cancer. Endotoxins have been associated with reduced risk for some diseases and increased risk for others.

The ALHS enrolled AHS participants who previously reported a doctor’s diagnosis of asthma and a sample of those without asthma, who completed questionnaires and lung function tests, and provided blood samples. Household dust samples were used to measure endotoxins [see above] and specific microbes. Notably, higher household endotoxin levels were related to having asthma, and to poorer lung function in AHS participants with asthma.

In the past, we saw that some associations of pesticides with asthma and wheeze depended on whether participants had grown up on a farm. New findings from the ALHS showed that participants whose mothers worked on a farm while pregnant had reduced levels of allergy biomarkers in their blood samples, and those who drank raw milk in childhood had better lung function as adults. These findings suggest that early life environmental factors influence respiratory health and allergy decades later.

We will soon invite adult children of AHS participants to enroll in a new study focused on how growing up on a farm may impact health in early adulthood and beyond. We will ask this group to answer online surveys about childhood activities and their health. You may hear about this from your children!


Pesticides and Sense of Smell

Loss of sense of smell is common with aging, especially in patients with Parkinson’s and Alzheimer’s diseases. We recently found that AHS participants who reported a high pesticide exposure event, such as getting a large amount of pesticides on their skin, were more likely to report a loss of sense of smell 20 years later. To follow-up on this finding, our collaborators from Michigan State University and Duke University will contact selected participants to complete a health and farming survey and a “scratch-and-sniff ” test to evaluate their sense of smell.